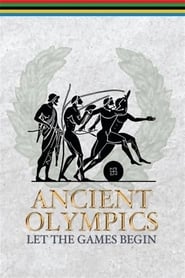 Description
Come back with us to Ancient Greece, 2,500 Years ago to the original Olympic Games. The ancient Games, like our modern Olympics, included champions and cheaters, glory and scandals, bitter rivalries and contests of strength, speed and savage combat. Set in 448 BC when the pounding of horse's hooves and the brutal hand-to-hand combat could be heard and seen by the crowds that filled the Olympic stadium. This one-hour special event follows the glory and corruption of the arc of a single, five-day Olympiad. The competitions include chariot racing, running, jumping, discus, javelin and two man-to-man combat finals-boxing and pankration, a form of extreme fighting in which death was not uncommon. With the help of sports historians and great athletes such as George Chuvalo and Olympic medallists Donovan Bailey and Angela Schneider, viewers travel back to a very different life-in a very different world.